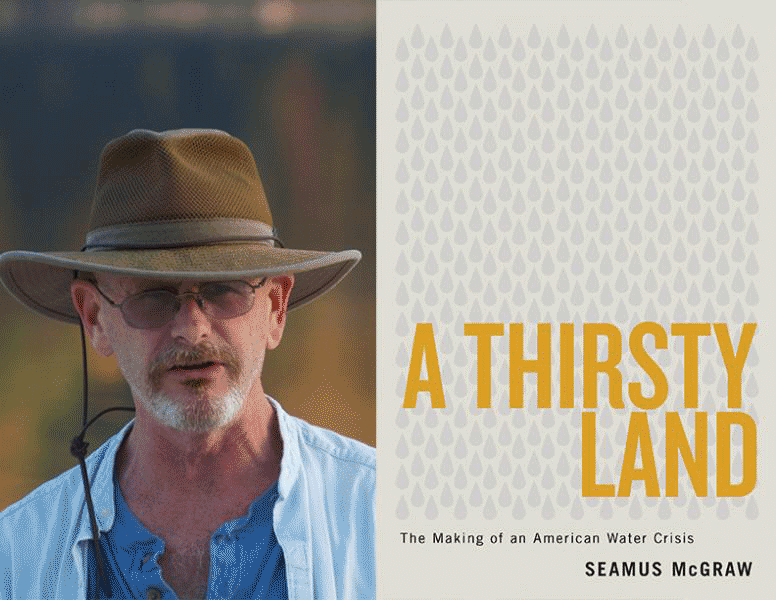 Join us for a reading and book signing at Lahaska Bookshop with Seamus McGraw, the ever-entertaining author of A Thirsty Land: The Making of an American Water Crisis on May 15 at 6:30 p.m.

Seamus McGraw is the author of several books, including The End of Country: Dispatches from the Frack Zone, and Betting the Farm on a Drought: Stories from the Front Line of Climate Change. His latest book, A Thirsty Land: The Making of An American Water Crisis, is out now. Seamus has been a regular contributor to many publications, including the New York Times, Huffington Post, Playboy, Popular Mechanics, Reader’s Digest, and Radar, among others. He has received the Freedom of Information Award from the Associated Press Managing Editors, the Golden Quill Award, as well as honors from the Casey Foundation and the Society of Professional Journalists.

Texas, writes journalist McGraw (Betting the Farm on a Drought: Stories from the Front Lines of Climate Change, 2015, etc.), sits at the same latitude as the Sahara and has much of that desert region’s aridity—so much so that in any given year, “it is more likely that a significant drought will occur somewhere than it is that the average amount of rain will fall.” If that formulation makes your head hurt, imagine how a Texas farmer or rancher feels, especially given the state’s right-of-capture water law, which essentially says you can extract all the water that sits underneath the land you own, even if that action dries up your neighbor’s well. In one instance, a farmer in arid West Texas is growing rice, knowing that it’s a wetlands crop better suited to the Gulf Coast, to make a point that the system of water rights is irrevocably broken.

McGraw traveled the length and breadth of the Lone Star State talking with people whose livelihoods are directly contingent on the flow of water, a problem that will soon confront Americans everywhere given the trends of climate change. In that sense, as so often, Texas is a bellwether. Houston, as he observes, has fine drinking water, but that came about because the formerly poorly used Trinity River, which flows a couple of hundred miles from Dallas southward, was heavily regulated under the terms of a water regime that has been in place since the 1950s and reinforced under the terms of the U.S. Clean Water Act. In our current anti-regulatory climate, the water may get dirtier in the coming years. It’s a wait-and-see thing, in other words, but in the meantime, McGraw’s fine book serves as a useful guide. —Kirkus Reviews